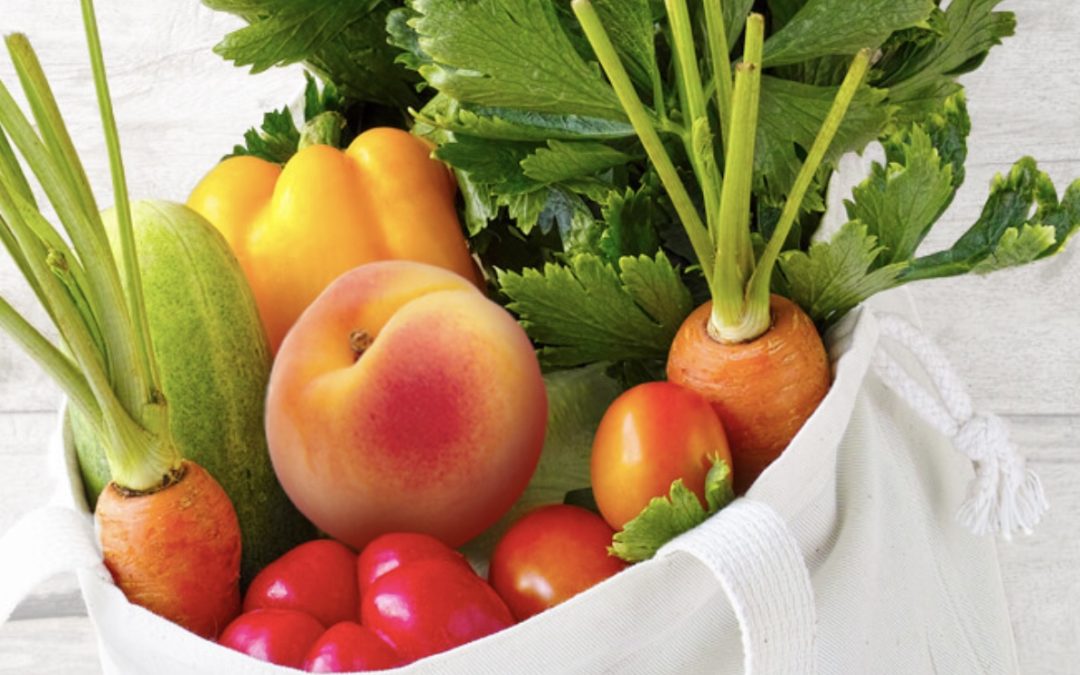 Macular Degeneration can Carotenoids Help? Studies of Carotenoid Complex™ proved that the product is highly bioavailable, reduces oxidation damage to cells by 44% and protects LDL cholesterol in the blood from oxidizing. These findings are important because oxidation contributes to aging, the decline of the immune system, and chronic diseases such as heart disease, cancer, and degenerative diseases of the eyes and nervous system.  (References)

For Macular Degeneration NeoLife Carotenoid Complex™ offers an ideal profile of all the carotenoids important for human health. They pioneered supplementation in this area by first developing the testing which made it possible to identify which carotenoids were found in different foods and in the human body. One must be able to identify a compound’s presence in foods if one wishes to make an extract of the substance from the food. This testing revealed vast differences in the quantity of carotenoids in different foods depending upon how they were grown and the variety of plant involved. For example, some spinach had 100 times more lutein than other spinach. GNLD NeoLife chose the richest and purest sources of different carotenoid families to produce a supplement with an ideal profile of carotenoids.

Encapsulation of carotenoids proved to be a particularly complex task. Carotenoids function as protectors against free radical oxygen which is abundantly present in the air we breathe. The GNLD NeoLife scientists developed a technology called the NutriMax process to protect the purity and potency of the carotenoids in foods. The technology involves preparing raw ingredients at low temperatures to prevent nutrient loss and encapsulation in an oxygen-free environment to prevent destruction of the carotenoids. The product was protected by British patent number 2,274,235 in 1996. 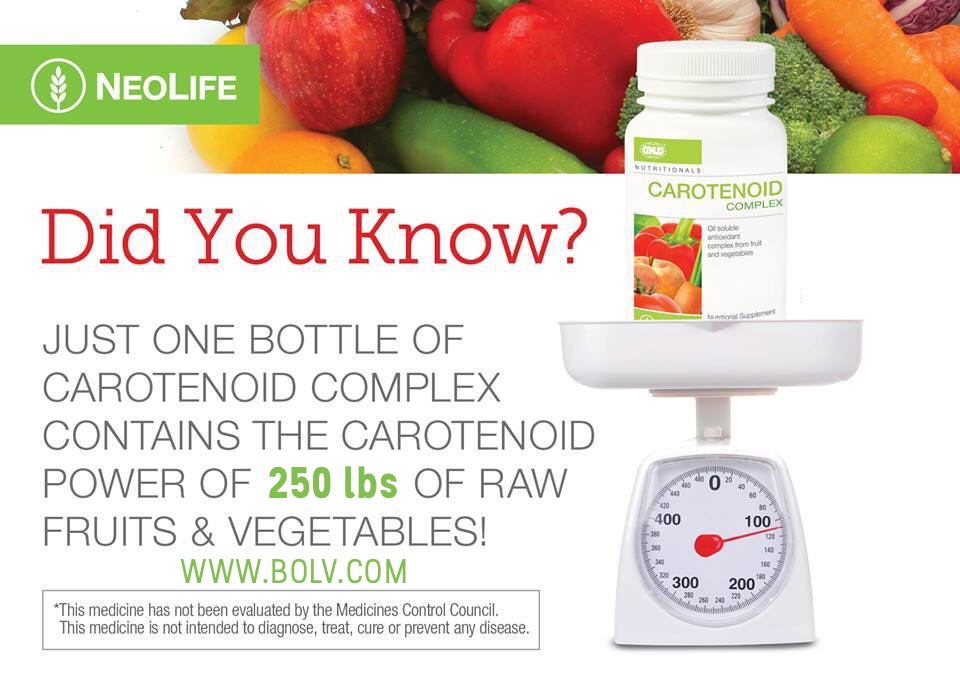 Antioxidant power of 250 pounds of raw non-GMO vegetables and fruits. Not available in stores.

The next stage in the development of the carotenoid product was testing to see if the supplement was capable of being absorbed and elevating blood levels of carotenoids. The successful conclusion of this study was presented in a poster or highlighted study before the New York Academy of Sciences. United States Depart of Agriculture researchers were present at this meeting and requested samples of the Carotenoid Complex™ to study. Independent research by the USDA revealed the potent beneficial effects of GNLD Neolife Carotenoid Complex™. A study in the American Journal of Clinical Nutrition in 1997 reported that Carotenoid Complex™ could boost overall immune function 37% in 20 days. In addition natural killer cells increased in number by 20% in 20 days. Natural killer cells are one of the arms of the body’s immune system which protects us from cancer. USDA researchers also found that Carotenoid Complex™ prevented oxidation of cholesterol in the body and reduced oxidative damage to cells.

Many years ago Professor Richard W. Young, Ph.D., professor emeritus at UCLA and a member of the Jules Stein Eye Institute, wrote me the following in a personal communication, “lutein and zeaxanthin are found in relatively large amounts (in the human retina), concentrated in the yellow spot (macula lutea) directly in the center of the retina, where visual acuity is greatest. This is precisely the region of degeneration and visual loss in AMD (age-related macular degeneration). The xanthophylls appear to have the triple function of (1) absorbing violet/blue light before it can damage the visual cells and retinal pigment epithelium (the cells which deteriorate in AMD), (2) acting as retinal antioxidants, and (3) being situated in just the right place for protection against AMD—front and center in the retina.” 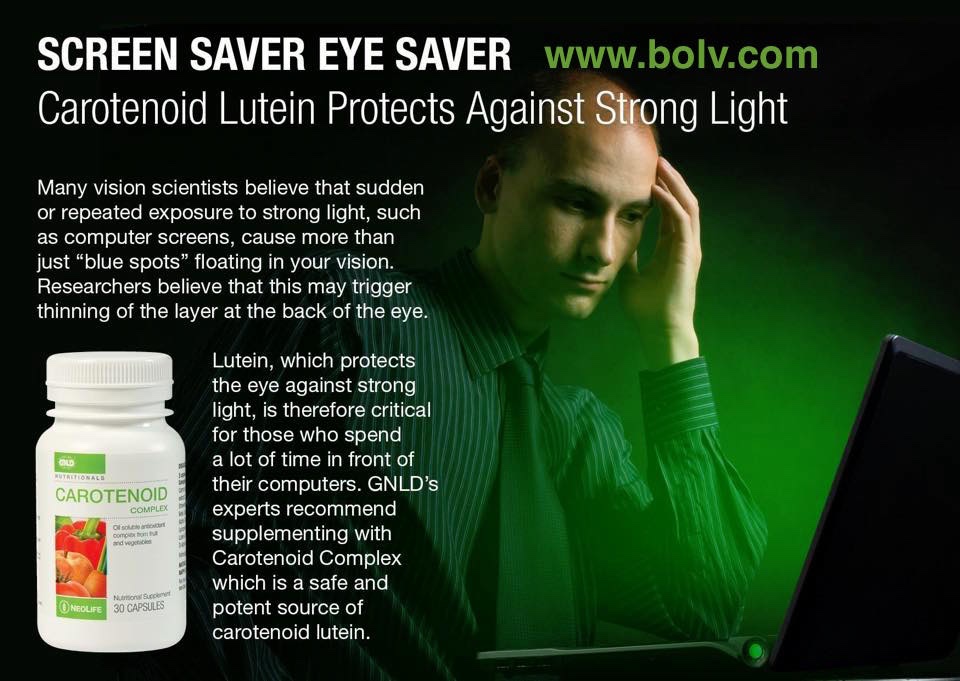 Supplementation with lutein and zeaxanthin has been shown to increase blood levels of the nutrients and also to increase macular pigment optical density where it is not optimal.

One study of healthy women under 75 years of age found that stable intake of lutein plus zeaxanthin was associated with substantially lower odds (about a 40% reduced risk) of developing age-related macular degeneration.

A separate study of 398 women 52-74 years of age found that dietary intake of foods rich in carotenoids reduced the risk of “pigmentary abnormalities” of the eye in a dose related manner– the higher the intake of carotenoid rich and vitamin E rich foods the lower the risk to the eyes. For some reason, in this study intake of foods high in alpha and beta-carotene was more closely associated with reduced risk than was the intake of lutein and zeaxanthin.